You know that old saying about blondes having more fun? Don’t you believe it. The fun and the fireworks really belong to redheads. It’s not just about the hair color they were born with. More than anything else, being a redhead is a state of mind – audacious, determined, and ready to take on a challenge. And most of the time, that’s what it takes to be a success in the garden.

I’ve read that less than one percent of people in the world have naturally red hair. Luckily for the rest of us, we can always act like we do – in the garden, anyway. You know who you are – the ones who grow roses in Seattle and lettuce in the deserts of the southwest, who scoop up the latest introductions from global plant-hunters such as Dan Hinkley and who have been cooking up compost and landscaping with native plants before they were a “thing.”

Welcome to my garden – of plants, experiences and stories inspired by redheads. And, just as gardeners share pass-along plants, I hope you share yours in return.

My first gardens were in the Pacific Northwest, where I fell in love with blazing Japanese maples that brightened even the grayest days. Now I’m a transplant to the red clay soil of Virginia, which you could call a natural state for redheads and their gardens. The Commonwealth’s family tree includes American history’s most famed red-headed gardener, Thomas Jefferson, and the firebrand revolutionary Patrick Henry. And it’s said that Revolutionary War hero Marquis de 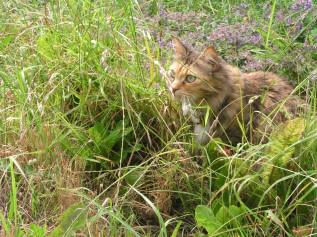 Today, I’m inspired by these historic personalities and by my vivacious gardening companion, a curious orange feline who’s ready for action at the first call of scarlet cardinals in the morning. So, with these words from another well-known redhead – and cat-fancier – Mark Twain, let’s head to our gardens – in the backyard or on the deck, indoors or out . . .